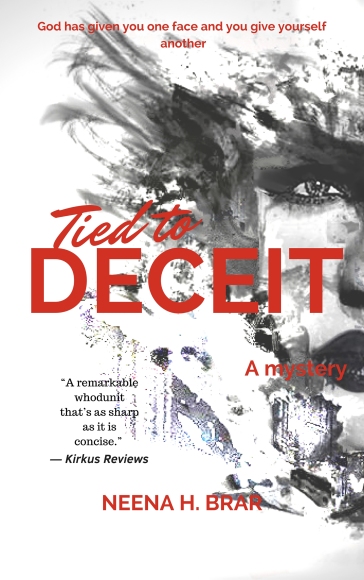 On a drizzly August morning, the inhabitants of the hill town of Sanover, Himachal Pradesh, wake up to the shocking news of the murder of the exquisite, secretive, malicious, and thoroughly immoral Devika Singh.

As Superintendent of Police Vishwanath Sharma begins to sift through the hidden secrets of Devika Singh’s life, it becomes evident that everyone who knew her seems to have a clear-cut motive for killing her.

Faced with the investigation of a crime that appears to have as many suspects as there are motives, Vishwanath Sharma probes the sinister web spun around a tangle of lies and deception.

Praise for Tied to Deceit:

“A remarkable whodunit that’s as sharp as it is concise.

Brar enhances her taut murder mystery with an engaging setting that effectively incorporates the local culture. The smart, believable denouement will have readers looking forward to Brar’s next endeavor.”

“A literary mystery saga that includes far more depth and psychological and cultural insights than your typical murder mystery’s scenario.”

A SHORT EXCERPT FROM TIED TO DECEIT:

Dr. Rajinder Bhardwaj, the owner and the head physician at Lifeline Hospital, Sanover, had showered after his brisk morning walk and joined his wife for an early morning tea. Gayatri Bhardwaj sat with her second cup of ginger tea on her favourite old, worn, woven chair on the verandah which overlooked their front garden: a tapestry of blooming carnations, marigolds, roses, and chrysanthemums. She longed for a clear, bright day and the dazzling blue sky of summer.

It was her favourite spot to sit in the mornings; a place from where she could witness the brilliant dawn streaking half of the sky coral; raindrops soaking everything wet during the monsoon; specks of silvery snow falling from the sky during winter. She could take in everything from the serene mountain peaks and the forest to their house—its roof, windowpanes, and the pebbled driveway that snaked its way criss-cross toward the outside big iron gate. She would sit there until Dr. Bhardwaj joined her after his daily ritual of a brisk morning walk.

They had done this for years despite the changing seasons and the changing equation of their marital relationship. They had spent endless mornings of their initial married years there, when their hearts were still giddy with the feeling of young love, and they would talk about everything and nothing. She’d been a bride at barely twenty, young and naive. He’d been ten years her senior, already on the way to establishing himself as a successful physician, the younger son of a landlord aristocratic family with old wealth. He had swept her off her feet then, and was all charm and charisma but then the magic slowly diminished and finally died due to his secret betrayals over time. Thousands of little resentments had replaced the early warmth. But their hearts, although heavy with bitterness and anger at the failed expectations, had gotten used to the solace of each other’s company that often comes with years of living together, and they never stopped performing this morning ritual of their married life.

Neena H. Brar lives in Edmonton, Canada with her husband, two children, a highly energetic German Shepherd, and a lifetime collection of her favorite books.

A hermit at heart, she’s a permissive mother, a reluctant housekeeper, a superb cook, and a hard-core reader.

Tied to Deceit is her debut novel.